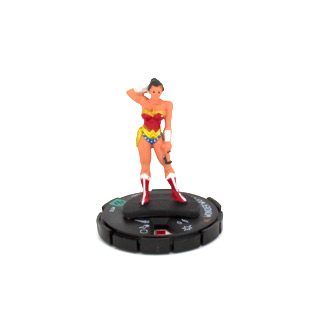 A new set comes out, which means it is time for a new Player’s Guide. You can grab a copy at the bottom of the article or you can go to the Downloads section to pick up the latest copy. This will be the last “Restricted/Unrestricted” release of the Player’s Guide. Next month will see the debut of Blackest Night and we’ll have our new Golden/Modern Age formats for the Player’s Guide.

A number of the figures from The Brave and The Bold have led to some questions. Where necessary, we’ve added clarifications to the Player’s Guide, but I’ll also review these items here.

One of the new mechanics introduced in this set, a number of people have asked about how this mechanic works in a sealed format tournament.  If you pull a Diana Prince and a Winder Woman in your boosters, you are welcome to use the Alter Ego special power to change. But if you did not pull a Wonder Woman, you cannot bring one from outside the game in order to upgrade the character. If you think of the normal game play as allowing you o pull from your collection, in the sealed environment, your “collection” becomes limited to only those characters that you got from your booster(s).

Some folks are trying to find loopholes in order to use Superman at a lower cost or to have a transformed Clark Kent become more powerful. For clarity, you can never heal a character beyond the starting line it comes into the game on. So when Clark becomes Superman, the starting line for Superman is the orange line. You cannot then try to heal Superman up from this line.

It is also not allowed to decide to just play the super hero at the lower cost, even if you start them on their orange line. Putting Batman on your force means you start with a 74 point character on his green line. You cannot start Batman on his orange line at 48 points. The orange starting line is only used when Bruce Wayne activates his Alter Ego special power. 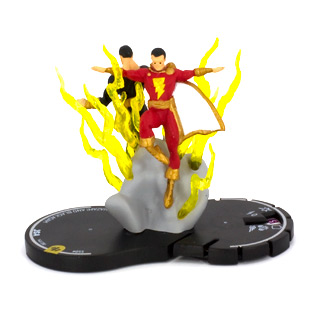 There are 3 figures that needed a bit of tweaking to more accurately reflect their design.

Power Girl – this errata was issued within 24 hours of her announcement. Power Girl was designed and play tested with a trait allowing her to use Super Strength.

Flash and Green Lantern – similar to Power Girl, this figure was designed and play tested with more capability than was printed on the final figure. With the publication of this errata, this figure now has a range of 8 and 2 targets.

Mister Miracle and Oberon – the special power that allows adjacent characters to TK this figure needed a slight adjustment as the figure is a multi-based figure and could not actually be moved with Telekinesis without some errata.

Shazam! and Black Adam – A small correction to the trait that allows you to choose the point value of the figure clarifies the Duo/Single confusion. In a nutshell, when you play the character at 280 points, it is considered a Duo. But at only 140 points, you get the

There are a couple of mechanics in The Brave and the Bold that use character names to determine how a mechanic works. Kryptonite Man, for example, has a real affect on characters named “Superman”. Meanwhile, Extant has a special power that causes characters with the same name to take damage in unison. This leads to questions about how close the name needs to be.

Secondly, where abbreviations are used, the entirety of the name should be considered. So “Dr. Doom” and “Doctor Doom” are both going to be affected by Extant’s special power.

The character who makes this the most “interesting” is the new, fun-to-play, Superman and The Flash character. To date, they are the only figure in the game whose name actually changes partway through the match. So while Kryptonite Man will have no affect on “Superman and The Flash”, once their “And the Winner Is” power activates, and the player chooses one or the other, the name of the figure changes to either “Superman” or “The Flash”. And the wrong choice here could lead to Kryptonite Man being very happy! 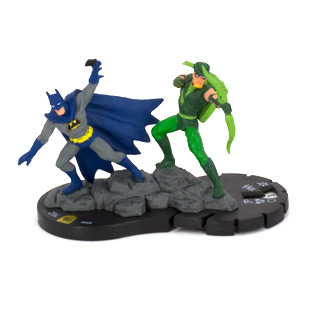 Traits cannot be countered, everyone knows that. It’s been like that since traits first appeared in Mutations and Monsters. But the concepts of “possess” and “use” need to be reviewed so that this can be completely understood. To do that, I’m going to use the “way back” machine and talk about a similar mechanic – feats. Feats are also something that cannot be countered. However an individual feat can either let a character use a power or it can say that a character possesses a power. Two examples:

Alias: “This character can use Shape Change…”

In the case of Alias, the character assigned the feat does not gain, have, or possess Shape Change. They can use it. As a result, you would not be able to outwit Shape Change on that character. On the other hand, a figure that is equipped with Force Field would gain Toughness – it behaves as if it is a power on their dial – and it can be outwitted, should you choose. Even though the feat itself cannot be countered, if it indicates the character now possesses something new, then that new thing might be able to be countered.

For example, Pym Particles, if it were used to gain the

symbol, you would not be able to outwit the symbol, because combat symbols cannot be countered. On the other hand, Giant Stride – one of the abilities the

icon grants you that can be countered – would still be available to an outwitter.

So now, let’s bring this back to traits. Almost all of the traits in existence specify that a character “can use” something (for example, Power Girl’s trait that says “Power Girl can use Super Strength”). In those cases, since the trait cannot be countered and the power itself is not possessed, the character gets that ability with no fear of it being countered.

But when a trait says that something is gained or possessed – like Batman and Green Arrow’s trait “Batman and Green Arrow possess the Sharpshooter ability.” – then it would allow an outwitter to target that ability, even though the source of it is something that cannot be outwitted. It’s the same as Toughness being available for outwit when Force Field is being used.

That’s about all I have for this week. The link for the latest player’s guide is available below and should also appear in the downloads section of the site. Anything you’re having trouble with, feel free to drop me a line at HeroClixRules@gmail.com